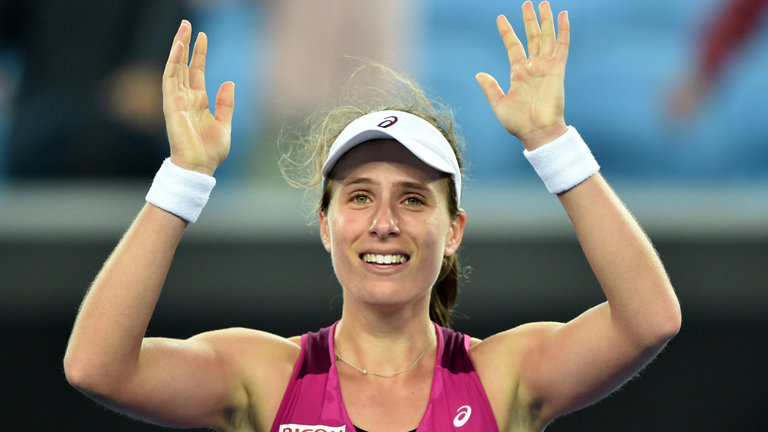 British number one Johanna Konta survived a scare against qualifier Aliaksandra Sasnovich before booking her place in the third round of the 2017 women’s Miami Open.

The 25-year-old cruised through the opening set but was then dragged into an arm wrestle by her plucky Belarussian opponent, who levelled the match by taking the second on a tie-break.

Konta’s hopes of a comfortable route to the next round were hampered by a late medical time-out for her opponent Sasnovich, as well as three rain breaks and a ferocious wind swirling around Crandon Park.

The British star was just relieved to send the world number 120 packing. “I’m definitely satisfied with how I came back in the third set and just competed,” Konta, who reached the last eight in her Miami Open debut 12 months ago, told reporters.

“Basically I just did the best that I could with what I had. It was very difficult conditions – not just the wind, but also the rain, quite a little bit of stop and start.

“It was about managing your expectations for any sort of level for the match but also any sort of frustrations that would arise because of the conditions – just keeping things in good perspective, fighting and competing. She played quite well and I really had to fight hard and work for it in the end.”

Home fancy Madison Keys also made it through to the next round after a 6-1 6-2 victory against Viktorija Golubic in just over an hour while qualifier Taylor Townsend scored a major scalp against number 25 seed Roberta Vinci after a 6-3 6-2 win.

Konta is currently priced 21.00 in the women’s French Open 2017 outright winner betting and quoted 19.00 to win this year’s US Open in New York City.